With energy rates on the rise, lighting retrofits provide the opportunity to reduce utility costs. A well coordinated lighting retrofit can have a dramatic effect on business profitability which was the case with our customer, an environment focused, industry leading, developer. Lighting consumes a significant amount of electricity for multistory parking garages. Like similar structures, the parking garages at the Scottsdale Fashion Square Mall housed inefficient, out of warranty, induction fixtures. Rather than to deal with potential maintenance issues, the parking operator decided to retrofit all of their existing induction lights to LED.

FSC Lighting’s L6000 series was chosen to replace, 834 induction garage lights throughout both structures, reducing operating costs while enhancing visual appeal. By replacing the 85WT induction fixtures with FSC’s LED 27WTradial wrap, the customer will use 482,916 fewer kilowatt hours (kWh) per year, an annual savings of approximately $57,950. FSC was able to integrate programmable sensors with top trimming and photocells which allows for both dimming and daylight harvesting. Since both garages are above ground, the operator can turn off the light fixtures located at the perimeter of the structure during the day; perimeter fixtures can be off for an average of 12 hours per day, saving the customer additional energy and operating expense. In addition, the LED L6000 Series has an ambient temperature rating of 122°F/50°C, giving it the ability to withstand the extreme Arizona weather. 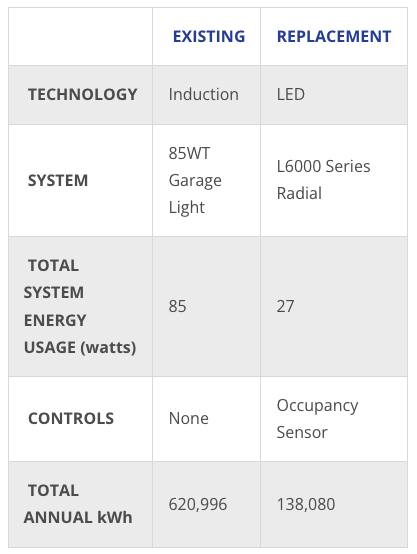 FSC helped this mall operator and developer save 77% in electricity costs, decrease energy consumption and improve the safety and security of mall patrons in two parking garages.